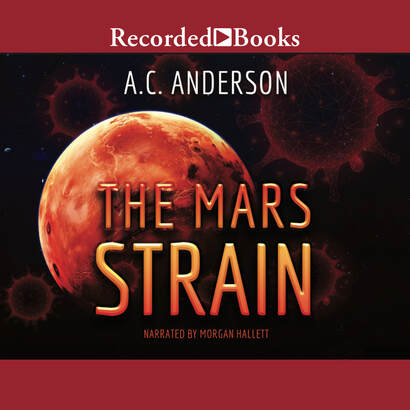 The Mars Strain
Audiobook produced by Recorded Books
Narrated by Morgan Hallett
​
Available at:
Audible
Apple Books
​Amazon
Booktopia (for those in AUS)

We've colonized Mars, but we never should've come back.

​When the first astronauts of the Mars Colony returned to Earth, they brought a mysterious, metal box they had found half-buried in the red dirt, called the Mars Cube. The scientists assigned to uncover its secrets tested it, scanned it, tried to blow it up, and everything in between. Then they accidentally opened it.

Biosafety level-4 laboratories, BSL4, hold the most deadly viruses on the Earth, and Juliet handled them daily. Her research at the CDC landed her a position on the Mars Cube Investigative Team in the world’s only BSL-5 lab. The only drawback: her ex was one of the astronauts that brought back the Cube.

​ What was held inside the Cube shouldn’t have gotten out. It shouldn’t have ever been exposed to our planet because the Mars Strain is now loose and killing at a 100% mortality rate. Juliet is fighting for our very existence, Jake is working with the Mars Colonists to decipher the Cube’s holographic message for a clue, and someone wants to take over the Mars Program for themselves. They’re all watching the clock, and its about to run out.
Awakening the Blades
Historical Fantasy

She must let go of her identity to save the world.

Lady Evangelina is a member of one of the most prestigious, Vestige houses in London—the fae-born families with various, powerful abilities—though she rarely has to use her magical talent. Instead, as lady of the house, she takes care of her widowed father and uses her social influence to further the dreams of her fellow debutants.

But politeness and propriety mean nothing when an uprising sweeps across the land—burning up her home...and her father. Evangelina and her two best friends are spared a similar fate by the quick action of General Jameson and his mercenaries. He’s a mystery with no family name and a rare Vestige of his own, but the greater enigma is Evangelina's ability to wield her Druid-forged blade with unusual results.

Jameson want's her to fight along side him in this new war. Evangelina wants to protect her friends and for everything to go back to the way it was before. And neither of them are prepared for the villages filled with people whose actions have been taken over by a mindless need to kill Vestiges.

As they flee for their lives, they uncover the motives behind the attacks, dodge puppet-controlled villagers, and find the maker of the Druid blade. If Evangelina can let go of the only identity she’s ever known, she’ll gain control of the most powerful Vestige her world has ever known, and a love she never dreamed of.